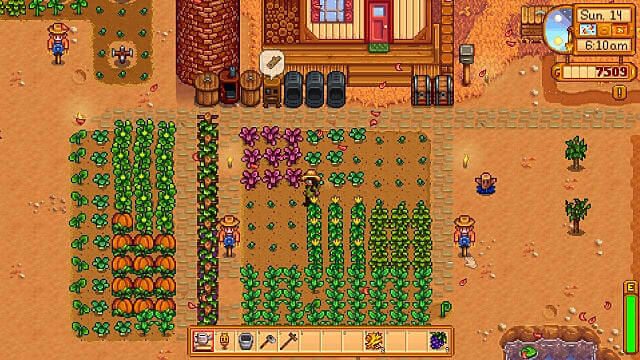 Stardew Valley: Everything You Need to Know About Sprinklers

In Stardew Valley, sprinkler irrigation is the way to go. With a good sprinkler placed in the middle of your crops, you won’t have to spend as much time, energy, and effort manually watering them with your watering can.

The sprinklers come in three different levels, covering an ever-widening range of tiles around them. Here, we’ll cover the rank of each, how to get them, and a few other things worth knowing.

There are three sprinkler heads in Stardew Valley, and each one is more powerful than the last. This means you will cover more tiles, water more crops, and save space.

Note: Sprinklers will not work on the beach farm layout!

Stardew Valley sprinklers are as follows: 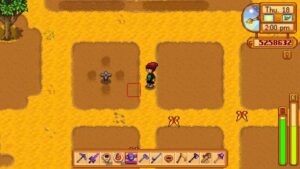 The basic spray is simply called a “spray” and it’s the first one you’re likely to get. It covers only four tiles – one tile facing up, one facing down, one on the left, and one on the right.

You will learn the basic sprinkler recipe when you reach Farming Level 2. This is what you need to create them:

You can melt these bars in a furnace with the use of five copper or five iron ores, respectively, and a lump of coal.

You can also find sprinklers for sale at the Traveling Cart, which appears in Cindersap Forest on Fridays and Saturdays.

It will be difficult to cover an entire field of crops with the basic sprinkler as they do not cover much of the total area. However, they are better than doing it manually, as long as you have enough resources to create them. Although an upgraded sprinkler can cover more tiles than these sprinklers, it does require power and recharging, while the sprinklers are automatic. 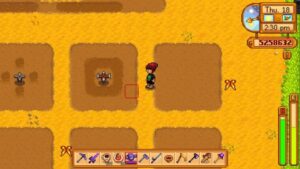 Quality sprays are the next best and will seem like a major upgrade over the basic spray.

They cover eight tiles in total – top, bottom, left, right, and each of the four diagonals. This creates a small 3×3 square, with the quality spray in the center.

It is often recommended that you do your first growing areas in 3×3 grids so that when you get your premium sprinklers, they will fit perfectly in the middle without the need to rearrange them.

Where to get quality sprinklers

You will learn the recipe for these best sprinklers when you reach Farming Level 6.

It is as follows:

While iron and gold ingots require five of their respective ores with a lump of coal, refined quartz is made from a single quartz gem and one coal. You can also make Refined Quartz with Fire Quartz and a Lump of Coal; this will produce three bars.

Like basic sprinklers, quality sprinklers can sometimes be purchased from the travel cart. 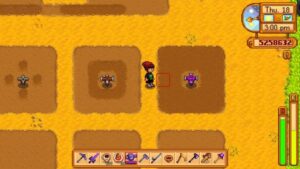 Easily the best sprinklers in the game, Iridium sprinklers are fantastic and will probably be what you look for as your farm develops.

Iridium sprinkler deck 24 tiles total. Imagine another square filled with tiles around the inner eight that are covered by a quality sprinkler, or a 5×5 grid with the iridium sprinkler in the center.

Tip: With the right design, you can cover your entire greenhouse grow plot with just six iridium sprinkler heads, with only four of them on the grow tiles! Check out our guide to greenhouses for design ideas.

Where to get iridium sprinklers

Before we discuss how to find the crafting ingredients, it should be noted that a reliable way to get Iridium Sprinklers is from Krobus’s shop once you unlock the sewers. Sell ​​one every Friday for 10,000 gold.

As for creating them, it will not be easy at the beginning of the game. You will most likely find very little Iridium Ore before heading to Skull Cavern in the desert. It is possible but rare.

Once you have five, you can combine them with a lump of charcoal in a furnace to make an Iridium Bar. The same goes for gold bars, of course, with five gold ores and a lump of coal.

battery packs are a bit more complicated. The main way to obtain them is with the use of a Lightning Rod. You will learn the recipe at foraging level 6 and then you can make them with an iron bar, refined quartz, and five bat wings. When placed on the farm, they will be struck by lightning during thunderstorms and will produce a battery pack the next morning.

You can also get solar panel battery packs, which generate one every seven sunny days. You will get Caroline’s recipe after completing her special order “Island Ingredients”, which can only be unlocked after reaching Ginger Island.

In the post-game, you’ll find some cool new items that are upgrades for your sprinkler heads. These are the pressure nozzle and the enricher. These can be attached to sprinklers for different effects, and you’ll find them in the reward list in Qi’s Walnut Room.

To unlock the Qi Nut Room, you will need to start your adventure on Ginger Island and start collecting Golden Nuts. Once you unlock the west side of the island with the island farm, you’ll find Qi’s Walnut room on the northwestern edge of the area. You will need to collect 100 golden walnuts to unlock it.

After gaining access to the special Qi room, you can go on quests to earn Qi Gems, which are then spent on the right-hand board for special items, like these sprinkler upgrades.

If the iridium sprinkler still doesn’t cover the range you’re looking for, fear not! There is a new item added in the 1.5 update that will help you. The pressure nozzle will further increase the reach of your sprinklers.

Pressure nozzles increase the range of the sprinkler in that they are placed on one tile in each direction. So, they will cover a square as follows:

Tip: With pressure nozzles, you can cover the entire greenhouse with just one arable tile missed by a sprinkler. Check out our guide to see how!
They can be purchased from Qi’s special shop for 20 gems for four pressure nozzles. Also, when completing the quest Peril in the Deep (or after activating the Shrine of Challenge), the sludge may drop a pressure nozzle, but this is very rare. 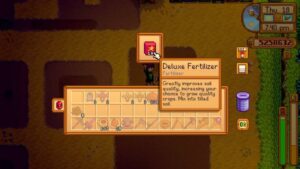 Enrichers, when placed in a sprinkler, can be loaded with a fertilizer like a chest. Any nearby tilled soil that the sprinkler can reach will be automatically fertilized with the fertilizer you have loaded into the enricher.

You can, as mentioned, buy them for Qi Gems ( 20 gems for four enrichers ) in Qi’s Walnut Room. But, you can also find them as monster drops while under the effects of Qi’s Skull Cavern quest challenges.

If you really enjoyed the guide and want to have more like this visit the site.