Fallout 76 is a very similar game but at the same time very different from the main instalments of the saga. If you want to make the most of this experience, we have some Fallout 76 tips and tricks to give you so you can jump into the Wasteland and survive. In addition to this, we also have console commands for Fallout 4, and cheat codes for Fallout 3.

The new Bethesda is a huge game, and when we say huge we don’t exaggerate. It is probably not the biggest map in the history of video games, but it is a very, very dense one, full of things to do and find.

Do not hurry to see the entire map, and take the opportunity to discover all the possible elements within each area in which you explore. It is easy to miss objects to collect or to interact with, and crafting is so important, an object can make a difference.

We not only talk about collecting everything in our path but also making sure to find items such as computers protected by keys – in which we have to make a small mini-game – or doors blocked by a PIN code that we can find in the environment. If you run and miss the document that reveals the PIN, you can lose some good resources.

If You Play With Friends, Change The Chip

If you are used to playing multiplayer titles with friends, you are surely used to doing everything together, waiting for each other and organizing to do the missions. In Fallout 76, you can play like this … or not.

Here you will find a lot of freedom to set the pace, each one can go to a part of the map or even do a different mission. The voice chat will always be activated for the team, so distance will not be a problem, and, in addition, we can teleport at any time to the side of any partner or to our base, without cost or penalty, and as many times as we want.

Emoticons: A Picture Is Worth A Thousand Words

If you need to tell your classmates your position, even if you are talking on voice chat, emoticons are a great idea. Imagine that they are attacking you: telling your teammates where you are is much more complicated than using the “help” emoticon, and in addition, the emoticon indicates your position on the map in real-time, so they can go straight for you.

There are many emotions and they can be useful for all kinds of situations, such as to indicate a path or to indicate the position of someone who wants to exchange, for example. It is a very practical tool that can go unnoticed.

The Importance Of The Letters

As you know, both the progression and specialization in Fallout 76 is done through some cards that we unlock when you level up. The first thing, and as silly as it may seem, is that we have to remember to open the envelopes they give us when they level up. When we level up a message appears on the screen, but we have to go to the Pip-Boy and select the option to get the cards. It is easy that if we level up in the middle of a mission we forget to open the envelope, so we have to be aware.

Obviously, leveling up doesn’t help much if we don’t use the cards, so they are vitally important. Each type of carte allows us to improve one of our skills, and also allows us to specialize in a certain way. If we are playing as a team, it is not a bad idea to organize with our teammates to equip some cards or others, so that we work more efficiently.

For example, there are cards that increase the experience the team wins, or others that allow us to revive our faster teammates. Thus, one player can specialize in offering advantages to teammates, another can serve as support or doctor … The organization is vital!

Take Advantage Of The Camps Even If They Are Not Yours

Needless to say, another very important element of the gameplay is getting new weapons and armor made, and that we can only do it at the work tables that we will find in the camps. The same goes for food and drink: to stay healthy and free of radiation we need healthy foods, and those can only be achieved in the camps. 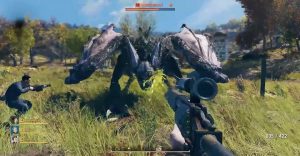 As we are not going to be constantly coming and going to our base, we have to take advantage of the camps that we find throughout the world. Some will be from other players, and others will be there, integrated into the map. We just need a couple of minutes to make a new weapon or to improve it, and the same with food. Take advantage when you find a place to cook or a work table: you never know when you will find the next one.

Do Not Be Afraid To Interact With Other Players

Later we will explain how the player against player works, but as general advice we tell you not to be afraid when interacting with other players. There is no advantage to kill a player who does not want to fight, so it does not make much sense that they will kill you if you are good. And if they try, you will not be penalized at all.

This encourages the meetings to be positive and sociable, and that most players want to collaborate. We can perform certain missions cooperatively with other teams, as well as exchange objects. And, if things go wrong, we just have to follow our path as if nothing. It is worth a try!

How To Launch Nuclear Bomb

In other installments of the saga, the only thing we have seen of nuclear weapons is their effect. Or, at best, we have used the Fatman. However, Fallout 76 allows us to launch nuclear missiles if we meet the relevant requirements. The effect of launching one of these artifacts will be completely disastrous for the environment, but it can have juicy rewards.

Obviously, it is a mechanic that is not easy to activate by oneself. But that does not mean that it will be impossible, nor something reserved exclusively for the most skilled players: anyone with the codes can do it. So let’s get involved and explain how this system works.

If you want you to have the option to get the codes legally, but it will take a lot of time. You have to kill wild Ghoul Officers (ghouls with backpacks and antennas that emit beeps). Where do they appear? Random in any hostile zone.

Keep in mind that, in case you want to do it “legally”, taking into account that codes are shared with the community periodically, it is quite possible that you will find that you can no longer launch any on your server. Do not make it unnecessarily difficult.

How And Where To Launch A Nuclear Warhead

To begin with this part, we must explain that there are only three nuclear warheads per server. Starting from this base, you have to know that they are always in the same places: the Alpha, Charlie, and Bravo points.

However, you cannot enter without more, because the elevators of each location, which take you to the hidden silo, are only accessible by “high members of the Government”. The solution to this is to join the Enclave and reach the rank of General (remember them from Fallout 3? Yes man, the leader is nothing less than the “President of the United States”).

Check Your Files In The Pip-Boy

While we do missions and explore scenarios we will collect many documents, some more “urgent” than others. Many documents will simply be fragments of the story that we can read later without haste, but others will be needed in the moment. Some, as we said before, are codes that can give us access to a locked area of ​​the level, and others can be, for example, treasure maps of areas near where we are.

If we see these documents two hours later, it will be real chaos to know which door opens or try to locate the treasure map on the other side of the map. Try to keep an eye on the documents in the middle of a mission or at the end of it. It can save you a lot of time.

If You Want To Avoid Problems, Be A Pacifist

As we will explain later, the player versus player mode is only activated if two players attack each other, but if we want to avoid problems, we have the option of being pacifists.

This is an option that we can activate, called “pacifist”, and uninhabited the friendly fire. This means that, in the hypothetical case of two teams joining together to fight enemies, no accidental shooting will activate the player-to-player mode. It’s better to prevent than to cure

Hope these fallout 76 tips and tricks are helpful for you, please tell us in comments.