If you want to know about the fallout 4 game and the Fallout 4 console command and cheats used in it, then you are on the right page. Fallout 4 is an action role-playing (a subgenre of role-playing video games) developed by Bethesda game studios and published by Bethesda Softworks.

It was released worldwide in November 2015, and it is the fifth major instalment in the fallout series (eight overall) for Xbox One, Microsoft Windows and Playstation 4. I also write some tricks for Fallout 76, and some cheats codes for Fallout 3.

If you’re feeling like you had to make a few tweaks to how the game plays, even just simply magic, or a few free items by cheating, then these console command of fallout 4 is exactly what you need. Following are the cheats by using which you can turn on god mode, or become an actual god by deciding who lives and dies.

You’ve painstakingly crafted even without the massive energy weapon, and speaking of laser-powered boomsticks. These all happen when you enter the console command and cheats of Fallout 4.

How to enter Fallout 4 commands?

You have to open the developer console screen for entering these commands. This is easily done by tapping the tilde (~) key, which can be found under the Esc key. When you are typing console commands, remember that commands are not case sensitive, so don’t worry about caps lock.

There is a section in which you will find something like <itemID> <#>. But in these cases, do not type the <> brackets, nor the #. Simply type out the name of the item you want, and follow up by replacing the # with the number of items you require.

These are the basic Fallout 4 console command and cheats. 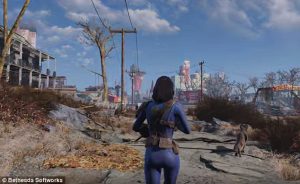 Fallout 4 console command codes that are very much useful for a weapon, legendary weapons, general items, and also codes for ammo and armour. So here we go;

In this game the player is the Sole Survivor of Vault 111, he emerges 210 years to the day and time after the Great War. During the pre-war era in the gameplay the player with their spouse and child. The setting also includes mountains, the outskirt of the city, coastal region, and the downtown Boston area. The starting area contains low-level enemies and is relatively safe which is in the northwest, but the enemies get tougher in the southeast area of the map.