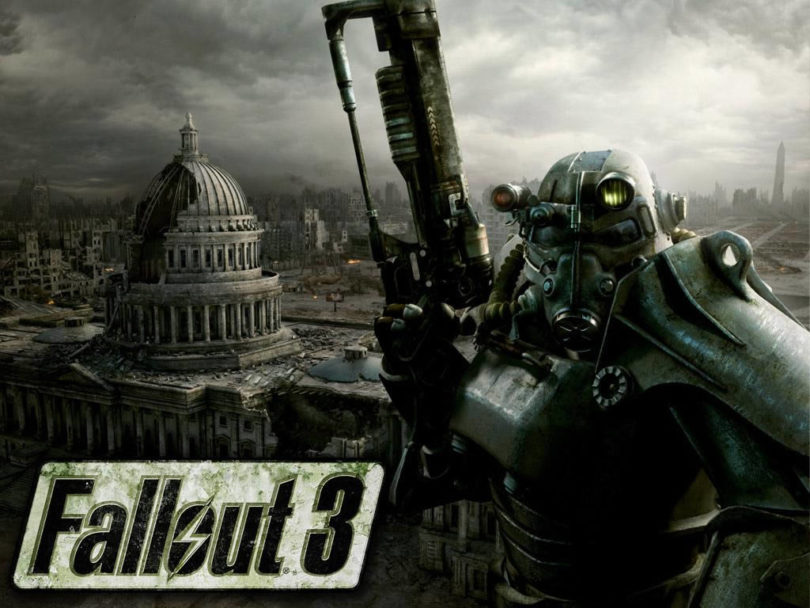 In Fallout 3 the console is a debugging tool left by the developers in the PC version of the game. It is useful for developing and quality assurance, but can also be used to access cheats and console commands.

To access the console, use the grave accent key (`) while in-game (Unpaused). The grave accent key shifts to tilde (~) on US keyboards, and the not symbol (¬) on UK keyboards. Other keyboard layouts will differ, but the key is usually to the left of 1, and just under the Escape key (Esc). The key is the top left key under escape, on non-US keyboards. (Example: §, ½ or | on Scandinavian (Swedish, Danish, Norwegian etc), caret (^) on German keyboards, on French ones, \ or | on Italian Keyboards, ‘ on Brazilian Keyboards, “ on Turkish keyboards). The HUD will disappear and you will get a prompt (|) in the lower left corner of the screen where codes can be input.

Those of you who cannot seem to get the console to appear, pay attention: You should always double-check all your .ini files when modifying your game, especially doing so significantly. On Windows Vista and Windows 7, these should be located in the following locations, assuming C: as your install drive:

On older operating systems, look in ...\My Documents\My Games\FalloutNV. This folder will contain two .INIs:

The final .INI can often be found in: ...\Steam\steamapps\fallout 3\ If you’re not using Steam (a.k.a D2D, etc.), consult the documentation that came with your version. This folder’s contents are non-modifiable by default if you have UAC turned on. Either disable it (not recommended), or edit the Security tab in the folder’s properties panel to allow you access. This folder will contain one .INI:

Make a backup of all .INIs before changing them. This is just a general good-practice rule for all data file editing, and it simply involves either making a copy of the file and placing it wherever you like, or making a copy and then changing the original file’s extension to something like Fallout_Prefs.bak.ini. The idea here is that these .INI files can often be the solution to simple problems like not being able to access the console. Fallout: New Vegas ships in most cases with the console enabled for PC. This can be verified by looking for the

string value under the [Interface] section. Furthermore, the console can (and if you’re planning on using it a lot, should) be altered via these .INI files to allow more console text to be shown on-screen. Assuming a minimum of 768 pixels of vertical display resolution (720p monitor), you can change the following values under the [Menu] heading:

Replace XX with a number 25 or greater, depending on your resolution.

You can scroll through the console commands history with your keyboard’s Page Up key, and scroll back down with the Page Down key, assuming you are using a standard QWERTY keyboard.

Example: player.additem CB547 1 – add one Vengeance to your inventory with full ‘health’.

Example: player.additemhealthpercent 432E 1 .50 will add 1 Gatling Laser at 50% to the player’s inventory. 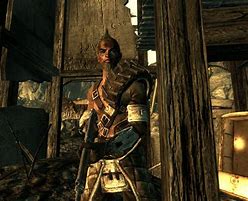 prid <ref_id> – set an id target. Same as left-clicking, but will work even if the target isn’t visible. Required with most of the following commands. In order for the commands to work you must simply type out the ref_id without the <>

Fallout 3 – Game of the year edition

kill followed by resurrect – kill and resurrect, reset the NPC

disable followed by enable – disable and enable, make sure the NPC is active

moveto player – move NPC to player (or player.moveto 3a77 to move player to Sydney.) 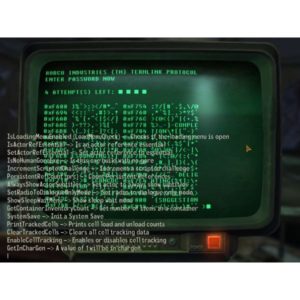 This is easiest if you first click on something in the world with the console open, to target it.

zap– Deletes the specified object ref. Useful for getting rid of objects that can’t be added to the inventory.

setScale– Set the scale of an item in game. Usually requires a save/reload for the new scaling to take place.

getScale– Prints out the scale of the item in the console.

player.placeatme <base_id> <stack amount> <quality> – place an item next to the player; for many items only a stack amount of 1 is valid

player.moveto <ref_id> – move the player to a nearby item. Player needs to be within the same location cell.

unlock– unlock doors, safes, terminals or any other locked container; you can of course also lock. Adding a number after lock sets the difficulty to that of the Lockpick skill. For example, lock 50 would create an Average lock, lock 0 a very easy, and lock 255 would create a lock that requires a key and so on. Unlock will not work on doors that are “locked from the other side”.

activate – activate an item, say a door, that is normally operated by a switch

markfordelete – similar to disable, will delete any item from the game, removing it permanently. It may disappear immediately, or it may require you to exit and re-enter the area.

setopenstate – similar to activate, but will open and close it without the player having to use it 0 = close 2 = open.

setownership – make the item yours. (for instance a cabinet or a bed, but if you try to make a safe or cash register and things like that yours, you will still lose Karma and there’s almost no point.)