The Black Rock (also known as Black Stone (they have translated it as Black Rock but hey…) or Blackstone) is a new block added in Minecraft update 1.16 that is basically like the Stone of all life (Cobblestone) but in this case of a black tone that I personally love.

This is basically useful for two reasons:

So nothing, in this post I will tell you everything you need to know about the Black Stone: How to get it, what it is for and its recipes; Let’s go there!

HOW TO GET BLACK ROCK OR BLACKSTONE

Luckily it won’t be a rare material, so it will be easy to stock up on lots of these Black Rocks. They can appear in the following locations:

WHAT IS THE BLACK STONE OR ROCK FOR IN MINECRAFT? 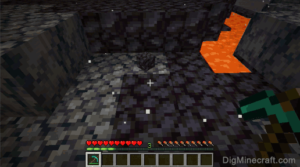 We could say that it is a Block comparable to Stone or Cobblestone; basically, we will be able to do everything that we could do with the Stone. You know what I mean: The Furnace, the Stone Tools, the Sword, the Slabs… that sort of thing.

What you do have to keep in mind is that except for decorative objects (to give it a name); Bricks, Slabs, Stairs… etc; everything we do will be the colour it has always had. If for example, we create a Stone Sword with Black Rock; this will not have a black tone, it will be the same colour as always. In fact, you can even create these recipes by mixing the normal Stone and the Black Stone and it will still work.

But what has been said, this does not apply to decorative objects, so let’s see them and by the way, I leave you all the recipes. They are the same as the recipes for the Common Stone, but hey, in case you know the recipes… I’ll leave them here below.

To get the Polished Black Rock we simply put 4 blocks of Black Rock-forming a square on the Crafting Table and that’s it: We will get 4 blocks in their polished version, which the truth is that they are better for constructions and others; although to taste colours, I suppose.

The truth is that I love the Brick Blocks and obviously the Polished Black Stone Bricks could not be missing. The process is the same as in the previous recipe, but this time we will use Polished Black Rock, the result will be the block in its Brick version; ideal for building castles, fortresses, houses and others.

And if you want some Polished Cracked Blackrock Bricks (OMG with the name) that are basically the same as the previous ones but with cracks, you will have to put the Polished Bricks in the oven (with its fuel and others) and that’s it.

This block can be used to create structures that look ancient: Abandoned Castles, Fortresses Ruined Houses… etc. But the truth is that Mossy Stone Bricks are cooler, right? 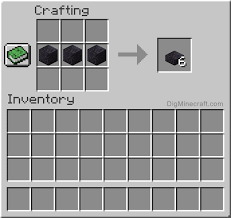 Which should be translated more as Wall, instead of Blackrock Wall right? But hey, I guess it is what it is. Two rows of Black Rock glued on the Crafting Table and voila, we will obtain a total of 6 Walls. We can also get it in Polished, Brick and Cracked Brick versions.

And we continue with the Black Stone Stairs. Little mystery for this recipe, you have to create a staircase drawing with Roca Negra and that’s it; It doesn’t matter which side you look at. I’m repeating myself, but it has to be said… We also have them in Polished and Brick versions (normal and cracked).

And that’s it! What do you think of the Rock or Black Stone of Minecraft? I think it will give enough play for construction, right?